We have just harvested our honey for this year and thought this would be a good time to update you on this year’s beekeeping season.

We are a team of six beekeepers – Kitty, Richard, Rosalie, Teresa, Tess and Lesley, but we would be very happy if anyone else wanted to join us – or just come along to see what we do.

We started the year with just one hive that had come through the winter strongly. In late spring we decided to split the colony into two, primarily to avoid it swarming. We then fed both hives. Unfortunately, shortly after doing the split the weather turned cold and wet and neither of the split colonies was doing well. When the weather eventually improved the bees were able to regularly forage for themselves.

In Spring, after the rape seed flowers had died off, we harvested a small amount of honey from the bees. The honey from rapeseed needs to be removed quickly as it can crystallise in the frame and become almost impossible to extract.

During the summer we found that one of the two hives had become queenless We therefore decided to reunite the two relatively weak colonies to make one strong one and this seems to have been successful. 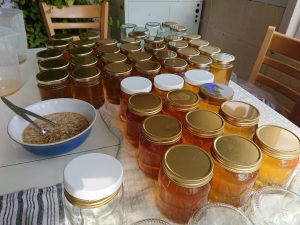 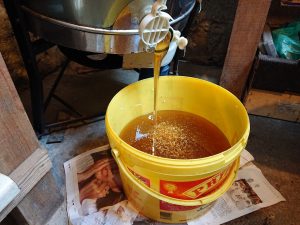 We recently took a number of sealed frames of honey from the hive for extraction, ensuring we left behind enough to see the bees through the winter. We were pleased to have enough for each beekeeper to have a couple of jars plus some for the couple who allow us to have our apiary on their land. There are a further 16 jars which we hope to sell for Sustainable Tiverton funds at the Apple Days this autumn. We plan to sell a 12 oz jar for £5.00 and a 1lb jar for £6.50.

The priority now is to prepare the bees to get through the coming winter ready to build up strongly again in the spring. We will weigh the hive to estimate how many stores there are and, if necessary, feed them with a sugar solution.

So far there have been no local sightings of the invasive Asian Hornet but we will continue to monitor for them as it thought inevitable that they will arrive and be a major threat to honey bees.